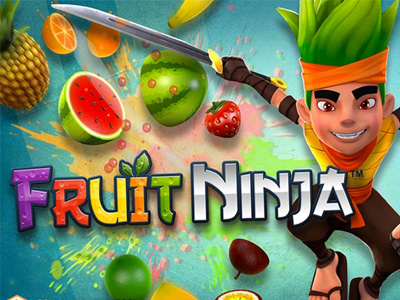 Many people dream of being a ninja, sneaking around undetected, and being good at dealing stealth-like
damage with a sword. Well with the Fruit Ninja game, you can now live at least one part of that dream,
and that is stealthily slicing things with a sword. Fruit Ninja is an arcade game where you will basically
just slice fruits and trying to achieve a high score.

But in this game, you won’t be controlling any character to do it. The fruits will be thrown in the air and
you will have to slash them. You use your fingers and slide on the screen to slash the fruits. You can
slash 1 fruit, 2 fruits, 3, or more. But you have to be careful when slashing because some of the things
that are thrown in the air are bombs and it would be game over if you hit them.

You should also avoid missing a fruit since you are only allowed to miss slicing 3 fruits before its game
over. But is becoming a master ninja fruit slicer the only thing that this game has to offer? Let’s look at
the different features of Fruit Ninja.

Different Blades to Unlock and Use

One of the main features of Fruit Ninja is that it has many different blades that you can use in the game.
No, you don’t actually see a sword being held, but when you do a slashing motion on the screen it has a
slash trail. The game allows you to have different slash trails to use. You can have a slash trail of the
The American flag, stars, flames, slime, and many more.

You will just need to unlock these blades so you can use them. The primary way to unlock the blades is
by purchasing them using the different resources you earn in the game.

Play with Other Ninjas in Multiplayer Mode

Another feature of Fruit Ninja is that it has a multiplayer mode. You can play with friends on the game’s
shared-screen local multiplayer game mode. What this means is that you and a friend will play the game
face-to-face and share on the device. This is a great way to have a friendly competition and see who
among you is the best fruit slicer, ninja.

You can play the multiplayer mode in the classic game, where you try to achieve the highest score or in
Zen mode, where you are given a set amount of time to slash as many fruits as you can and achieve a
high score. If you don’t want to play face-to-face, you can still have a friendly competition by comparing
high scores of the classic or other game modes in the game.

Fruit Ninja also features different game modes for you to play. There’s the Arcade Mode, the Classic
Mode, and the Zen Mode. Aside from these three regular modes, there’s also the Event mode you
participate in a challenging fruit slice event and battle against different characters. You can acquire great
and unique blades if you win these events.